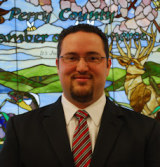 Matt Votaw was hired as Executive Director of the Perry County Chamber of Commerce by the Board of Directors and began serving in that capacity on March 16th, 2010. Matt reports to the Board of Directors of the Perry County Chamber of Commerce, and directs his efforts for the businesses of Perry County with attention and emphasis to civic, commercial, cultural, economic, educational, industrial, and tourism interests of the community. Before his hiring, Matt began his service with the Chamber as a Board member in May of 2008, and was elected to serve as their President in the following November. He served in that capacity until December, 2009. He is a Graduate of Leadership Perry County and is very active in the community.

Matt was born and raised in and around Akron, OH. He graduated from Lake High School in 1995 in Uniontown, OH, and following graduation, entered the United States Marine Corps, beginning his training at Parris Island, SC. He served honorably until 1997, when a service related injury caused a medical separation while stationed in Millington, TN. He moved to Union City, TN, where later he met his wife, Valerie Averett Votaw, while she was attending UT Martin. They were married on the Buffalo River in 2001. They decided to move back to Perry County in 2004, and then built their home on the family farm in 2005. They have 2 sons, Riley and Andrew, the fifth generation on the family farm, as well as two dogs; Sophie, a Cocker Spaniel and Blue, a Yellow Lab. Matt enjoys hunting, sports, and spending time with his family. 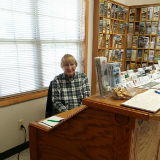 Rita moved to Perry County in 2013 and began volunteering almost immediately at the Chamber. In addition to the Chamber, she is also a very active volunteer with the Flatwoods and Cedar Creek Fire Departments, the local American Red Cross Blood Drive and Disaster Relief efforts, and with the regional library board and local Friends of the Library.